These surveys were conducted before the election, in August and September, shedding light on why voters rejected Election Denier candidates when they went to the polls.
See Related Reports Replacing the Refs
Issue Areas
Share

A project of States United Action

Why did Election Deniers fail so thoroughly in the midterm election? Which types of voters rejected Election Denier candidates, and why? States United Action conducted statewide-representative polls of registered voters in Arizona, Michigan, Pennsylvania, and Wisconsin that help answer this question. These surveys asked respondents about a variety of democracy-related questions, including their attitudes toward Election Deniers.

These surveys were conducted before the election, in August and September, shedding light on why voters rejected Election Denier candidates when they went to the polls.

Here’s what we learned.

The election denial movement is unpopular.

The midterm elections weren’t a fluke, or the result of a one-off slate of candidates who couldn’t connect with voters. Our poll suggests that in the midterms, the election denial movement itself played a big part in dooming these campaigns.

Elections often come down to voters who aren’t attached to either major party and those who vote inconsistently. In our polls, both of those groups rejected Election Deniers at high rates.

Among Independents, 34% said they would be less likely to vote for an Election Denier, compared with only 12% who would be more likely.

Inconsistent voters felt much the same way. Among Americans who sat out the 2016 election but did vote in 2020, the most common response was that they’d be less likely to support an Election Denier. That was also true for voters who switched the party they supported between 2016 and 2020.

Graph only includes respondents who reported voting in 2020.

Taken together, these results demonstrate that the voters who so often decide elections—those voters without attachments to either of the two major parties, or those who vote inconsistently—rejected the Election Denier movement at high rates.

We wanted to know what specifically voters dislike about Election Denier candidates. So we asked them about nine behaviors that Election Deniers have engaged in. Voters said they were most concerned if candidates participated in the January 6 insurrection (41% of respondents selected this option), encouraged people to threaten election officials (37%), or spread lies and conspiracy theories about our election system (also 37%).

“Below is a list of concerns that some people have voiced about the behavior of candidates who say they believe the 2020 presidential election was stolen from Donald Trump. From the following list of behaviors, please choose three (3) that you believe are most concerning in a candidate.”

Question was asked only of those respondents who reported being “less likely” to vote for an election denier. Bars represent the percentage of respondents who selected an option as one of their top three concerns. 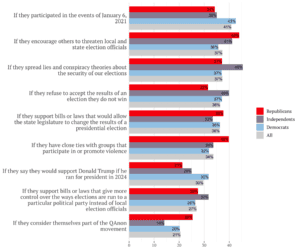 The more voters learn about Election Deniers, the less popular they are.

When voters in the poll were given more information about a hypothetical candidate’s Election Denier activity, they were more likely to express an unfavorable opinion of that candidate.

Taken together, results from our surveys shed some light on voters’ perceptions of Election Deniers during the 2022 midterms. The poll results help explain the election results. Election denial simply wasn’t a viable strategy. It received little support from people who hold no attachments to either of the two major parties and from inconsistent voters—precisely the types of voters who so often decide election outcomes. People reported disliking Election Deniers for a wide variety of reasons, and for the most part, the more they learned about Election Denier candidates, the less they liked them.

The lesson: It’s not just bad for our democracy, it’s bad politics.

Prior to the 2022 midterm elections, States United Action worked with Citizen Data to field statewide-representative polls of registered voters in four states: Arizona (n=2,412), Michigan (n=2,422), Pennsylvania (n=2,378), and Wisconsin (n=2,175). These text-to-web surveys were fielded between August 23rd and September 6th, 2022. The margins of error for each poll were ± 2% in each state except for Wisconsin, where the margin of error was ± 2.1%. Responses were weighted by YouGov to match the population characteristics of each state with respect to race, education, gender, age, and vote choice in the 2016 and 2020 presidential elections.

In keeping with best research practices (e.g. Keith et al. 1992), the partisan breakdowns included in this report classify those Independent voters who reported “leaning” toward either the Democratic or Republican parties as partisans. Therefore, the “Independent” category reported above includes only those Independents who professed no party attachments whatsoever.

Time: Election Deniers Were Among the Biggest Losers of the 2022 Midterms

A Democracy Crisis in the Making Report Update: 2022 Year-End Numbers