In 2022, politicians who spread lies and conspiracy theories about our elections sought the power to oversee our elections, enabling them to interfere with nonpartisan election administration and put our free, fair, and secure elections at risk. We tracked their performance in statewide races.
See Related Reports Surveying Voters on Election DenialismA Democracy Crisis In The MakingSecretary of State RacesAttorney General RacesGovernor Races
Issue Areas
Share

A project of States United Action

The 2022 midterm elections were defined by a dangerous trend. In states across the country, Election Deniers entered races for governor, attorney general, and secretary of state. These candidates campaigned on lies about the 2020 election and asked Americans to trust them with power over future elections.

When the voters had their say, they spoke loud and clear. They believe in our elections, they’re tired of conspiracy theories, and they’ll step up to defend the freedom to vote. In most places, Election Deniers were rejected decisively. (In battleground states, it was a clean sweep: They lost every race for statewide jobs that oversee voting.)

Elections are national events, but they’re run by the states. That means the state officials who oversee elections—governors, secretaries of state, and attorneys general—are on the front lines of our democracy. In all, 141 Election Deniers entered races for these three positions in 2022. Many were defeated in the primaries, often by Republican incumbents who refused to endorse the Big Lie. But dozens advanced to the general election. When Americans finally went to the polls, more than half the country had an Election Denier on the ballot.

The voters chose democracy. As of December 7, out of 94 races this year for governor, attorney general, and secretary of state, only five non-incumbent Election Deniers emerged as winners. In total, 15 Election Deniers won statewide races in 2022 – the majority holding onto seats they already held. All of the winners were in states that voted for former President Trump in both 2016 and 2020. (One race, the contest for Arizona attorney general, has not been called by news organizations and has proceeded to an automatic recount under state law; unofficial results show the Election Denier trailing.)

As a result, Election Deniers gained almost no new ground for their movement. The Election Denier loss rate was around 90% for races that have election oversight power – showing that voters held them accountable for two years of lies designed to erode the freedom to vote.

But we must not lose sight of ongoing threats to our elections.

Predictably, even clear losses in the midterms didn’t stop Election Deniers from promoting toxic conspiracy theories and working to undermine trust in our free, fair, and accurate elections. Some Election Deniers who are well outside the recount margin have yet to concede their races, showing they aren’t interested in meeting even the lowest bar for what’s healthy for our democracy. Some have filed or threatened to file frivolous lawsuits and encouraged their state officials to ignore the law and refuse to certify the election. Some have responded to their defeats by seeking control over their state parties.

Threats also persist beyond the ballot box. In state legislatures, partisan politicians are trying to rewrite the rules of elections to lock in the results they want. Since the 2020 election, more than 200 bills have been introduced in 33 states that would interfere with nonpartisan election administration. Dozens have been adopted, and more are on the way. At the same time, the Supreme Court is considering a case that could fundamentally change elections. Election administrators and election workers still face unacceptable harassment and outright threats.

And Election Deniers will have power in the states where they did win. The 15 Election Deniers that won statewide races oversee elections for almost a third of the U.S. population. Scores of others won races for Congress and in state legislatures. And where Election Deniers hold office and try to ignore the will of the people and break the law, we must hold them accountable—shining a light on what they say and do, calling them out, and taking them to court.

The midterm elections proved that the election denial movement is deeply unpopular. But it hasn’t been extinguished. So we must remain vigilant. Democracy prevailed in 2022, but the fight goes on. 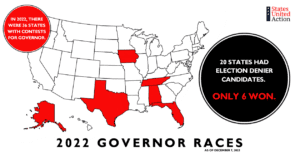 For more information about the role of governors in election administration, click here. 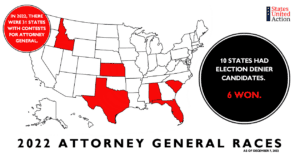 For more information about the role of attorneys general in election administration, click here.

In 2022, 27 states 1In Illinois and Wisconsin, the Secretary of State signs the certificate of ascertainment but does not oversee election administration. There is a push by a number of Wisconsin candidates running in 2022 to change the duties of the office. In Alaska, the Lieutenant Governor oversees election administration. In South Carolina, the executive director of the South Carolina State Election Commission administers elections. had contests for secretary of state. As of December 7, just three Election Deniers won their races for secretary of state out of the 13 that ran in the general election. Eleven of the 13 Election Denier candidates ran on a major party’s ticket. 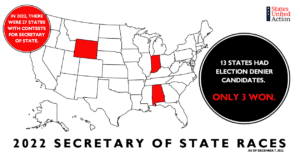 For more information about Election Denier candidates for secretary of state in 2022 and the role of secretaries of state in election administration, click here.

Why did Election Deniers fail so thoroughly in the midterm election? States United Action conducted statewide-representative polls of registered voters in Arizona, Michigan, Pennsylvania, and Wisconsin that help answer this question.

These polls were conducted before the election, in August and September, shedding light on why voters rejected Election Denier candidates when they went to the polls.

Here’s what we learned.

— The voters who often swing elections really don’t like election denial. Elections often come down to voters who aren’t attached to either major party and those who vote inconsistently. In our polls, both of those groups rejected Election Deniers at high rates.

Among independents, 34% said they would be less likely to vote for an Election Denier, compared with only 12% who would be more likely. Inconsistent voters felt much the same way. Among Americans who sat out the 2016 election but did vote in 2020, the most common response was that they’d be less likely to support an Election Denier. That was also true for voters who switched the party they supported between 2016 and 2020.

— Voters reject violence, threats, and lies. We wanted to know what specifically voters dislike about Election Denier candidates. So we asked them about nine behaviors. Voters said they were most concerned if candidates participated in the January 6 insurrection, encouraged people to threaten election officials, or spread lies and conspiracy theories about our election system.

— The more voters learn about Election Deniers, the less popular they are. When voters in the poll were given more information about a hypothetical candidate’s Election Denier activity, they were more likely to express an unfavorable opinion of that candidate.

For a deeper dive into the polling and our methodology, click here.

Primaries are a key part of the democratic process, enabling engaged voters to choose which candidates they want to send to the general election and potentially hold office. In many cases, especially where there is a large majority of voters from one party statewide, the primary is the more competitive race. The lower voter participation in primary elections historically means a smaller subset of voters plays an outsized role in shaping the elections.

The 2022 primaries had the highest turnout in a primary election in a midterm election year since 2000, with 29% of registered voters participating, up from an average of 27%. This was also higher than the turnout in most of the presidential election year primaries (behind only 2016 and 2020). While this higher turnout is noteworthy, the turnout did not increase by a large percentage in most states. The average turnout from 2002-2018 for primary elections during midterm election years was 25.5% and in 2022 it was 29%.

There are, however, some states where turnout in primaries this year was much higher than expected. Notably, Kansas had a 22% increase in voter turnout from the primary in 2018. This is the largest increase in a midterm election in this period, and the highest turnout in any primary (including presidential years) that Kansas has had since 2000. Pennsylvania had a 12.5% increase over the 2018 midterm, almost matching turnout for the 2020 primary, a year that had record breaking turnouts. Georgia also saw an increase of 8.7% greater turnout than in 2018 and matched their 2020 primary turnout.

It’s also important to understand the importance of voting for every position on the ballot in primaries and the general election. The data shows that frequently the top of the ticket, usually the governor or U.S. senator in a midterm election, gets more votes than other positions on the ballot, meaning that many voters leave parts of their ballot (often referred to as “down ticket”) empty. This trend likely contributed to increased turnout in Pennsylvania and Georgia, which have Senate elections this year, just as an abortion referendum in Kansas contributed to significant turnout despite lower participation across all of its primary races.

Overall, this trend predicted that the November 2022 midterm would have slightly higher turnout than the 2018 midterm. According to data from the U.S. Elections Project, turnout in the 2018 election was among the highest for a midterm election in modern history, with 49% of eligible voters casting a ballot. While results from the 2022 elections are not yet fully complete, as of mid-November, the U.S. Elections Project estimates that 47% of eligible voters cast a ballot this year. In 14 states, turnout was actually slightly higher than it was in 2018.

What We Are Tracking: Announced and/or filed candidates running in 2022 for three statewide offices with election administration responsibilities: governor, attorney general, and secretary of state.2In some states, there are candidates with filings/open campaign committees that have not taken any public actions since October 2021 to indicate they are active candidates. They are not included in our tracker. If any one of these candidates take steps that indicate they are actively running this cycle, we will add them.

To qualify as an Election Denier, a candidate must meet one or more of the criteria below:

For more information about the campaign financing of Election Deniers in key states, please see this report from the Brennan Center for Justice.

Time: Election Deniers Were Among the Biggest Losers of the 2022 Midterms

A Democracy Crisis in the Making Report Update: 2022 Year-End Numbers